I have always enjoyed playing original music. The Sheff Dogs (1994-96) were playing a mix of originals and cover songs, but blues covers still dominated the set lists. I was writing a lot of songs that had a harder rock edge, which didn’t fit the Dogs format. In the fall of 1996, drummer Peter Reid and I began to explore this direction at his barn/studio east of Kingston. We invited Jordan Zylstra, a young, talented, and very funky bass player to join us. The songs that I had been writing developed into an excellent balance of rock, funk and blues. After months of rehearsing, Lounge Act hit the Kingston music scene in the spring of 1997.

We were able to build an audience for the original tunes in part from the success of the Blues Review and Sheff Dogs, and from our willingness to travel around Canada to play. The decision to only play originals put us in the category of Indie Artists, which I still am, and embrace. We recorded User Friendly Groove in August 1997. Following it’s release in 1998 Peter decided to leave the band. Taking the drum seat for a short term was Mark Agnew, then Casey Fisher joined on a permanent basis. Although Jordan and Casey laid the groundwork for the second recording, Postcards From The Lounge, we parted at the end of 1999 as friends. In early 2000 I hired bass player and engineer John McKinney and drummer Jim Casson, and vocalist Katalin Kiss, veteran studio session players, to record Postcards from the Lounge. From that point on, Lounge Act became a touring act and playing with various musicians on an availability basis became the format until I laid it to rest in 2002. Along with McKinney the bass duties were also held by Steve Dall and Scott Mulligan. Drummers included Christos Smirnios, Jeff Bonneyman, and Mark Fraser. We even had some lead guitar players for a while with Johnathon “Bunny” Stewart, Hank Sinatra, Matt Woodward, Tommy Gautier, and Dan Curtis answering the call to rock! pan>

In these archives you will see and hear many Indie Artists who helped shape, perform and record as members of Lounge Act from 1997-2002. I am thankful to each and every person that I was able to share the Lounge with. For the first time since 2002, User Friendly Groove and Postcards From The Lounge are available for sale, in a downloadable format.

In January of 2016 Lounge Act celebrated it’s 20th anniversary with a Reunion of the original members at The Mansion. It was an epic night! 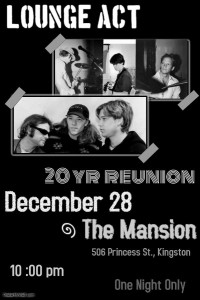